A Very Different Waterfront on its way Downtown- Squamish 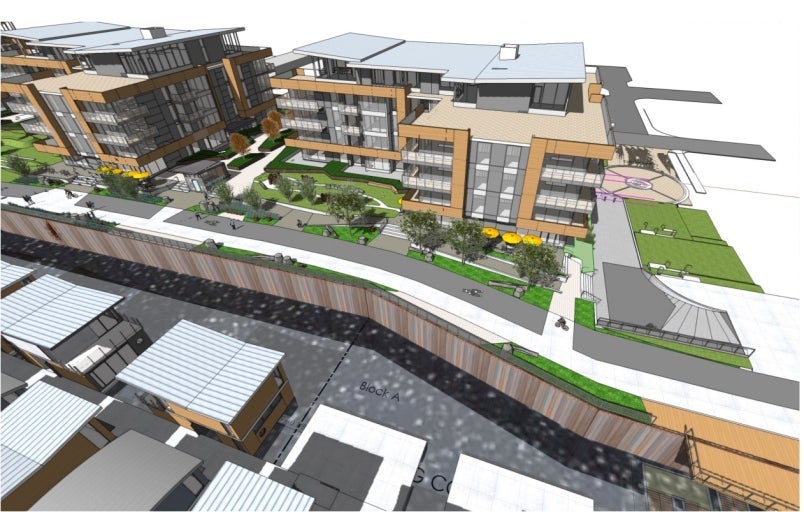 Mamquam Blind Channel will soon be home to SiroccoThe Mamquam Blind Channel waterfront in downtown Squamish is set to get a major facelift.
More details of the future Sirocco waterfront community planned for 38050 Loggers Lane were revealed Tuesday night as council OK’d the project’s development permit at the first special business council meeting of 2017.“It will be certainly a great asset to our waterfront,” said Coun. Doug Race. “I am looking forward to seeing it built out. I think it provides some wonderful public space and nice places for some people to live.” The Mireau Property Developments project will include 138 apartments and 520-square-metres of commercial space in three, six-storey buildings, according to a staff report to council. Twenty-seven float homes and four floating commercial units will bob on the surface of the Mamquam Blind Channel adjacent to the apartments.Views of the Stawamus Chief will be possible through the spaces between the buildings, a feature Race in particular likes.Marine-oriented businesses along with a restaurant, café, offices and a recreation equipment rental business are imagined for the commercial space. Public space and green space will be distributed throughout the community with public art and street furniture included in the plan.  A public waterfront walkway will run along the top of the dike on the channel that will connect Xwu’nekw Park to the south and the newly built Mistral rental complex to the north. Two public docks will bookend the project at each street end. The public will be able to access the float home community docks and Mireau Marina, which is proposed north of Winnipeg Street, according to the report.Individual apartment units will range in size from 746 square feet to 2,120 square feet. About nine per cent of the units will be one-bedrooms, 74 per cent will be two-bedroom units and 17 per cent will be three-bedroom units, the report stated. Four storeys of the apartments will sit atop a bottom-floor parkade and a floor of mixed residential and commercial units on the second floor of each building. A total of 230 parking stalls will be provided, though the district requires fewer, at 189.The project will unfold in four phases, with each apartment building coming before the floating homes community, according to the report. “Congratulations on a very well thought out plan,” said Mayor Patricia Heintzman to members of the development company who were in attendance. The deveopers have said they will not comment to the media on any of their projects.
@ Copyright 2017 Squamish Chief