Time to make decisions for the Cheekye Fan 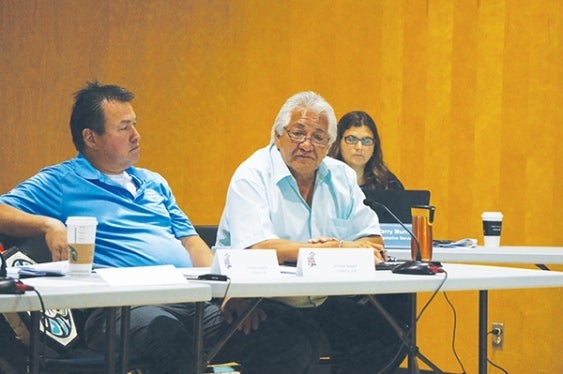 Decisions need to be made more quickly. That was the message to council from Squamish Nation representatives and the developer of the proposed 750-unit housing development on the Cheekye Fan in Brackendale at council’s committee of the whole meeting Tuesday.The representatives of Squamish Cornerstone Development, which is a partnership that includes Squamish’s Bethel Corporation, Matthews Southwest Development Company and the Squamish Nation, sat down around the table with council to see if the project could move to second reading of an Official Community Plan (OCP) amendment and first zoning amendment reading, even though debris flow mitigation for the area has not yet been determined.“You can commission reports up the ying yang,” said hereditary chief Gibby Jacob, adding that several reports and studies have been done on the Cheekye Fan and what needs to be done to protect the people who live there from landslides.“This is an opportunity for our Nation. This is the first time we are going to be welcoming people on our traditional territory. Everything else around here has been taken [from us]…. Part of this is training of our people and the ability of our people to bring home a paycheque.” The proposed mixed residential development on 178 acres includes 750 housing units, a child-care centre, commercial area and a park, all to be built over a 20-year period.The Squamish Nation and development partners originally submitted OCP and zoning amendment applications in 2013. Jacob said there needed to be clarity on when decisions are going to be made. Included in the proposed development plans is the design and construction of a debris flow barrier, the construction of which would be paid by the developer. Two expert panels have told council debris flow mitigation has to occur regardless of new development to protect those currently in the area. Mayor Patricia Heintzman said no one is happy with the delays in the process, but council has an obligation to do its due diligence on the project. “We have a legislated public hearing process, and we need to have certain information at the public hearing in order for the public to sort of weigh in,” she said, adding people will want to know what the mitigation is going to cost and how it is going to be funded when they deliberate on the development project.In March of 2015, District of Squamish council gave first reading to the OCP amendment to re-designate the lands for the project. At that time, council set out conditions to be met before further readings. Council required a range of alternative options for mitigation and their costs be explored, including determining the community’s risk tolerance in terms of mitigating against a landslide.A series of open houses on risk tolerance have been held, and in November, council approved hiring a consultant to look into mitigation options. A preliminary report on options is expected in the coming weeks, according district staff. Staff has tentatively scheduled Feb. 16 for second reading of the OCP amendment and first reading of a zoning bylaw amendment.
@ Copyright 2016 Squamish Chief