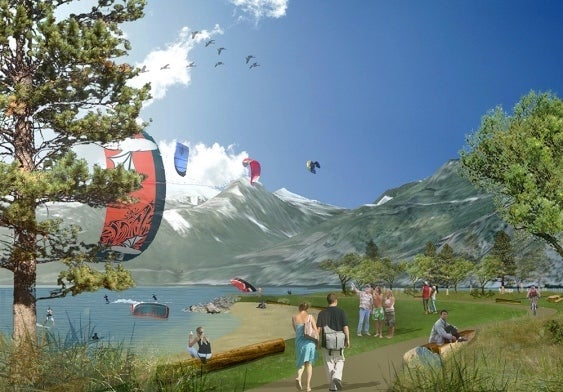 It’s finally a done deal.The Oceanfront Lands officially transfers on Wednesday from the district to developers Newport Beach Developments, a partnership between Texas-based Matthew Southwest and Squamish’s Bethel Lands Corporation.“I am feeling awesome,” Mayor Patricia Heintzman told The Squamish Chief in an interview in her office on Tuesday. “I just spent an hour signing many, many, many documents.“This is 11 years in the making. This is community vision being steadfast and clear.”The oceanfront development is “a monumental milestone for our community and signifies the beginning of a new chapter in the realization of a community dream,” the mayor said in an official statement. “Through all the chapters of this epic tale, there are so many people who were instrumental in getting us to today.“But this dream started with the community’s vision, and that vision has been the driving force, keeping the dream alive and keeping us focused on the end goal since 2004.”The 20-year construction on 103 acres will provide 2,300 jobs by build-out and eventually include residential units to house about 6,500 people, recreation amenities, an educational institution, a waterfront park and a commercial hub, according to a District of Squamish news release.Construction will start this year with the main peninsula road, followed by initial work on the oceanfront park. “The developers will be starting right away on the road and the park and actually starting some buildings down there and moving some stuff around," Heintzman said. “People will see stuff happening in the next couple of months.”The lands were sold to the developer for $15 million in cash, plus construction of the oceanfront park estimated at $10 million, a windsports beach, two boat launch areas, a sailing centre, a waterfront public walkway on the entire perimeter, a lands’ end monument, community open space, pedestrian and greenway connections and a public art contribution of $150,000, according to the district.“The purchase of the Squamish oceanfront lands begins a new chapter for residents, one that Newport Beach Developments is honoured to be a part of,” Michael Hutchison of Newport Beach Developments said in a news release. “We are eager to begin this unique opportunity of constructing a development that will impact the community of Squamish in a monumental way. Working together with community groups, local trades and business, we will achieve the community’s vision for a place where people work, live and play in the heart of the Sea to Sky corridor.”
@ Copyright 2016 Squamish Chief -