More Reasons To Move to Squamish!

According to CNN Money, Squamish is the top ranked mountain town! 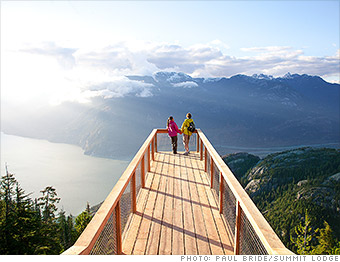 Stopping to soak up the view from Mount Habrich's Summit Lodge.
WINNER: SQUAMISH, B.C.Why now: Travelers visiting British Columbia's Coast Mountains usually make a beeline for Whistler. This year, though, the Squamish area, located about halfway between Vancouver and the former Olympic host, is becoming a destination in its own right, thanks to a new $22 million Sea to Sky Gondola and summit lodge. Go this summer while Squamish is still flying under most vacationers' radar.What to do: Explore Squamish's Mount Habrich, about an hour north of Vancouver. On the gondola, it takes only 10 minutes to ascend 3,000 feet (ride: $35). At the top, hike along the new Skyline Ridge trail, where you'll find a mix of open forest, small ponds, and lookouts over fjords. "Keep an eye out for deer and the occasional mink," says Sea to Sky Gondola general manager Jayson Faulkner. There's also a new 110-meter suspension bridge, though the risk-averse can enjoy similar views from the Summit Restaurant and Edge Bar, glass of wine firmly in hand.Back at sea level, head to downtown Squamish. Rock climbing and watersports are big here. If you're looking for an adrenaline boost, shave 22% off the rates at Kiteboarding School when you take lessons with a friend (from $280) or try a $275 two-day beginner whitewater kayaking class from Coast River Kayak. For a more sedate option, you can stroll along the Squamish Estuary, a popular nesting spot for herons, loons, and other migratory birds.The 17,000-person town is also one of B.C.'s best for beer lovers. "Craft brewing in the province began in Squamish and carries on today in fine style at Howe Sound Brewery," says John Burns, editor-in-chief of Vancouver Magazine. "Try the nut brown ale or imperial stout."Where to stay: Squamish has some of the area's most affordable lodging options: Bed down in a waterfront cabin for $100 at Sunwolf, a pet-friendly property located on five wooded acres. Or go for the simple yet comfortable Hotel Squamish (from $63). Request one of the quieter rooms with mountain views.